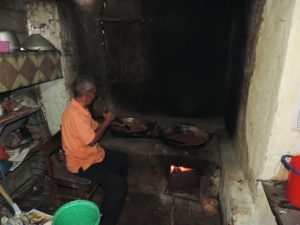 Rajapakse said:
“I want to cut down the consumption of wood for cooking for my milk toffee making business. Our traditional stove requires a lot of wood, which is expensive to buy and tedious for me and my wife to gather.”

EVD Solution:
IDEA in Sri Lanka has installed more efficient industrial stoves for household industry use. The new stoves require significantly less wood for cooking than do traditional stoves. In fact, the consumption of firewood has been reduced by as much as 50 per cent in some household industries. The wood collected from Rajapakse’s backyard is enough to fuel the more efficient stove, so the family no longer needs to buy wood.

Rajapakse and his wife can cook food as well as make toffees for his business a lot faster with the new stoves, which also produce less smoke than the older technology did. Improved industrial cook stoves can aid thousands of small household industries, making their workspaces less smoky and reducing the need to buy fuel wood. 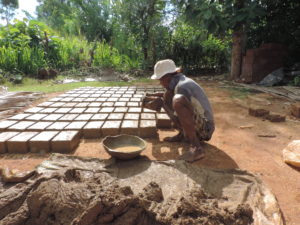 Dharmaratne is a small-scale brick producer in the Anuradhapura district in Sri Lanka. He works alone in his little workshop, producing thousands of bricks using a temporary brick kiln.

EVD Solution:
IDEA taught Dharmaratne the use of biomass waste as an input for his brick manufacturing. It also contributed an improved design for a more efficient, low-polluting brick kiln that has better heat circulation. The improved kiln uses both firewood and rice husk as fuels. This has helped reduce the amount of pollution caused from conventional methods of brick production while also lowering the consumption of firewood. Importantly, for Dharmaratne, the process now takes less time and reduces the number of bricks that break in the firing by about 15 per cent. There is immense potential for replacing conventional materials with bio-waste for many small and medium-scale industries in Sri Lanka.