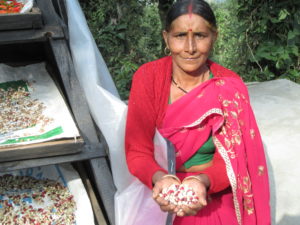 This is Bimla Devi’s reason for becoming associated with WAFD in 2012. She lists out the different things she learnt and has done ever since this association with WAFD began: “I made organic compost baskets, installed a solar dryer with their support, learned the method for fruit preservation and made pickles chutneys, and squashes.” At this point she offers to make a glass of squash made from rhododendron flowers. An offer that is declined and she herself is not too surprised at that. It is winter after all and the only beverage that is welcome is tea, which is offered soon enough.

Bimla Devi then proceeds to talk about her solar dryer. The solar dryer is made of bamboo that provides it the structural support and is then covered with plastic sheet which enables the process of drying. Its appearance is misleading and at first sight one does not expect it to yield the results it is supposed to, but it does. Bimla Devi has used her solar dryer to dry turmeric (around 10 kgs) which she then powders and stores to be used in cooking all through the year. She does the same with red chillies (5 kgs) and likewise stores the red chilli powder for the entire year. She also dries the local fruit of ‘chulu’ (this fruit resembles an apricot but is sour in taste) and then uses it to make a chutney she learnt during the fruit preservation training.

She also used the dryer to prepare 2 kgs of ‘badis’, a popular dumpling like foodstuff made from black lentil and colocasia. The two ingredients are combined together to make small dumpling-like balls that are then dried and stored. These can then be used in the future to make curries and are very useful when seasonal vegetables are not available. The thing she likes most about the solar dryer is that there is no discolouration. She says that the solar dryer is very effective and does not require constant monitoring. “You can put the turmeric or whatever else in it to dry and then simply check after a few days. The turmeric and chillies retain their original colour.” Here she brings out the turmeric powder she prepared as evidence. She says that another great advantage is that the vegetables/herbs inside it remain clean as dust or anything else cannot enter. She then compares it with the tedious process of drying things traditionally in the open that require one to keep constant watch. Despite that there is no guarantee that it will remain free from dust or tiny insects.

By using the solar dryer, Bimla Devi has produced some very good quality ingredients free of cost and these are ingredients that are always needed in most Indian kitchens. She even sold some of these, namely turmeric powder, red chilli powder, and dried ‘chullu’ for a total sum of Rs. 4000. The solar dryer is a great boon and has turned out to be an unexpected income generator for her. WAFD has helped her to get another, bigger sold dryer which is intended to be used by her and any of the other women in Jagdhar. Bimla Devi plans to use both more effectively and on a larger scale in the near future.