CRT-Nepal has worked actively to implement Eco-Village Development (EVD) in three local villages in the earthquake-affected Kavrepalanchowk district. The organization also has advocated for EVD from grassroots to the national level.

The EVD project has been a significant positive factor in the recovery after a massive earthquake struck in 2015. After the earthquake, immediate needs assessments were made through dialogues with the communities. New EVD solutions were identified in all three villages based on their needs and feasibility. These included portable improved cook stoves, solar PV, plastic tunnel houses for vegetable cultivation, micro-irrigation systems, and rainwater harvesting. In addition to local demonstrations, building capacity was also a priority. The villagers learned to integrate water-lifting technologies with micro-irrigation systems and with their agricultural practices to accomplish more with less water. Training in repair, handling, and maintenance of the solar PV components was also given to the communities, as well as training in climate-resilient agricultural practices that allow them to cultivate offseason vegetables.

Raising awareness and disseminating knowledge is an important part of sensitizing project communities and neighboring communities. The local governmental energy officer of the district also participated in knowledge dissemination on government programs relevant to EVD. Among the results were development of used-water-collection ponds, cowshed management, development of fishponds, pit composting, and growing fruit trees in backyards.

VILLAGE DEVELOPMENT PLANS
The EVD project gives villagers the tools and guidance that they need to plan the development of their own village. Primary emphasis is placed on village development plans and on enabling communities to communicate their plans to the concerned stakeholders. Through continuous dialogue with the communities, the project team is supporting village development plans from the grassroots level. For that purpose, the villagers have learned about climate change and about the impacts of climate change on their livelihoods. Representatives from the villages were trained to do assessments of needs and resources, to identify the problems faced by their communities along with the potential solutions to the problems. They were also invited to participate in a national renewable-energy technology exhibition organized by the Alternative Energy Promotion Center to get first-hand experience and to learn about various potential solutions. As of now, villagers are in the process of identifying the development indicators based on which the village development plans will be finalized and shared with the concerned stakeholders. 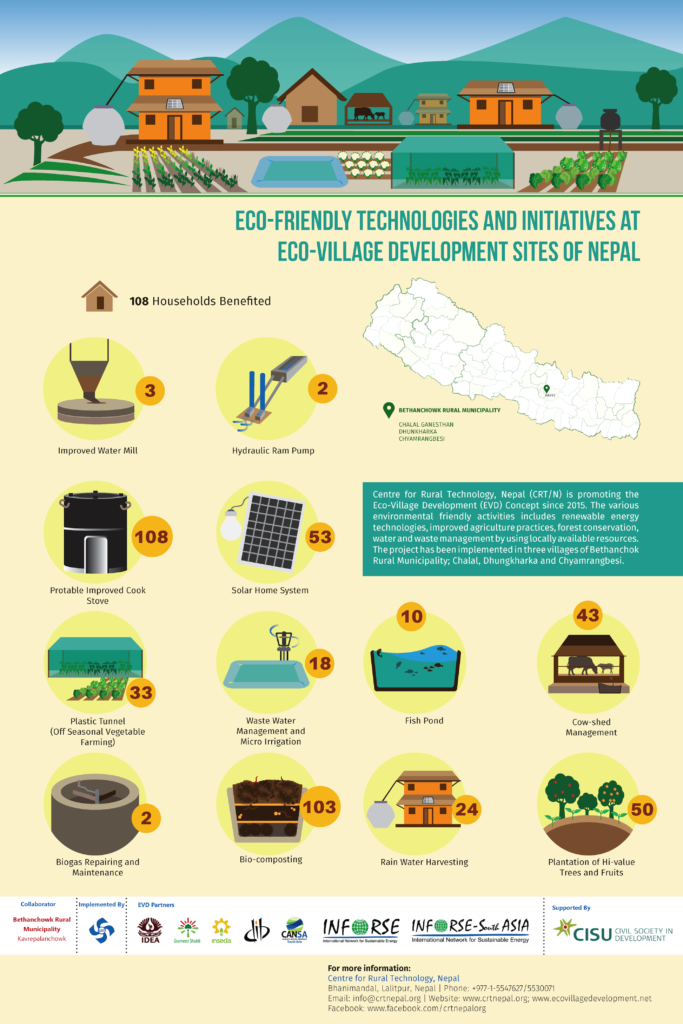 WHAT DIFFERENCE HAS THE INTERVENTION MADE?

Besides a change in people’s livelihood in terms of an increase in income and awareness and knowledge received about environment and climate change, support from the local government for the project is also one of the important aspects of this intervention. EVD concept and work has been introduced to national policy makers, climate negotiators and several other organizations working during different events, exhibitions. News on EVD published in newspaper, presence in social media and other media, has resulted in recognition among a larger mass. Organizations like AMRUT and several independent researchers from Bangladesh and Sweden visited CRT/N to know more about the project. Proposal on The emPOWER village Project based upon EVD concept and Empowerment training has been submitted jointly with University of Illinois and John Hopkins University, USA to Prince Albert II of Monaco Foundation. During the course of intervention, CRT/N got the opportunity to work with different regional and national organization, which created a path for future collaboration and networking.

Read more about the impact of the EVD project here in the Booklet made by CRT/N in Nepali or English.

You can learn more about the EVD projects in Nepal at the website of CRT-N and INFORSE and read some case stories here.